This was my first SketchCrawl. Folks on the forum here had agreed to meet at the annual Solstice Parade in Fremont (a funky Bohemium section of Seattle), near a giant statue of Lenin brought over from Russia. I was expecting a group, but ended up solo.

Here's the food court next to the statue, before the parade started:

After the parade started, the statue became the perfect perch for some:

Fun anyway. I plan to do it again!
Top

Been solo many times, but if you like to draw--who cares? Nice sketches, glad you started and look forward to seeing more.
Top

leobro, I guess we missed each other. too bad. i was there at 10 and waited for a while before heading to sketch the troll. i really like your sketch of the lenin statue with people all around, it was pretty busy, wasn't it? Tim, were you there? I couldn't find you either!!! this is my first batch of drawings, i'll post some more later SOOO sorry missed you guys. My friends and I got there quite late, ~12 and I took a photo of the Lenin statue with the guy sitting on top of the head! Leobro you must had been really close! (Cross the street?)

Tim was there too, and guess everyone just missed each other...there were too many people...but I promise I wont be late(again) the next time we meet.
Top

Hi Gabi,
Sorry I missed you! I love your sketches. They look quick and loose, which makes them fun, but they're also very clear and accurate. That's what I aspire to.

I rode my bike and got to the statue at exactly 10:00, and waited a few minutes but didn't see anyone with a sketchbook. The bike parking area was pretty far away so I didn't get back till 10:20. You were smart to head off somewhere quieter. (And to not have a bike.)

Hey LittleFish,
You too. I'd love to see the photo you took of the statue. I drew that sketch from the curb next to the statue.

Hope to see Tim's sketches if he was there.
Top

wonderful work Gabi and Leobro!!!!
I want to go to Seattle now!!

thank you guys! here are the rest of my sketchcrawl drawings. too bad we all missed each other, a lesson learned! the Parade was fun to draw though, I think we should try again next year, get there really early and set camp by the curve so we have a good angle. I like second one in each of three serie... interesting. Cheers.
Sketchcrawls | Everyday Matters | First 100
Top

Beautiful work, Seattle.
Gabi - I would love to be able draw like you! I love the bridge drawing. Your perspective is always so dead-on!
Top

leobro wrote: Hey LittleFish,
You too. I'd love to see the photo you took of the statue. I drew that sketch from the curb next to the statue.

hmm I just found this picture... it''s from the last batch of my old canon before it died 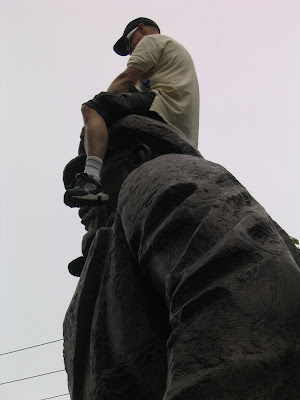