drawing marathons from around the world
http://sketchcrawl.com/forum/

by thetaranakisketchers
Today, ANZAC Day was extra special this year in Australia and New Zealand as we commemorated the centenary of the Gallipoli (Turkey) landing - 25 April 1915. Eight months of difficult fighting clinging onto steep cliffs. 87,000 Turkish soldiers died. The aim was to take control of 'the Narrows'. The most successful part for the Allies was the evacuation back to Egypt.

In New Plymouth it began with the Dawn Service at 6am including the 'Last Post'.

We decided to draw at the Cenotaph, draped in flags, wreaths and littered with the Flanders poppies. The road was cordoned off and people stopped to pay their respects. 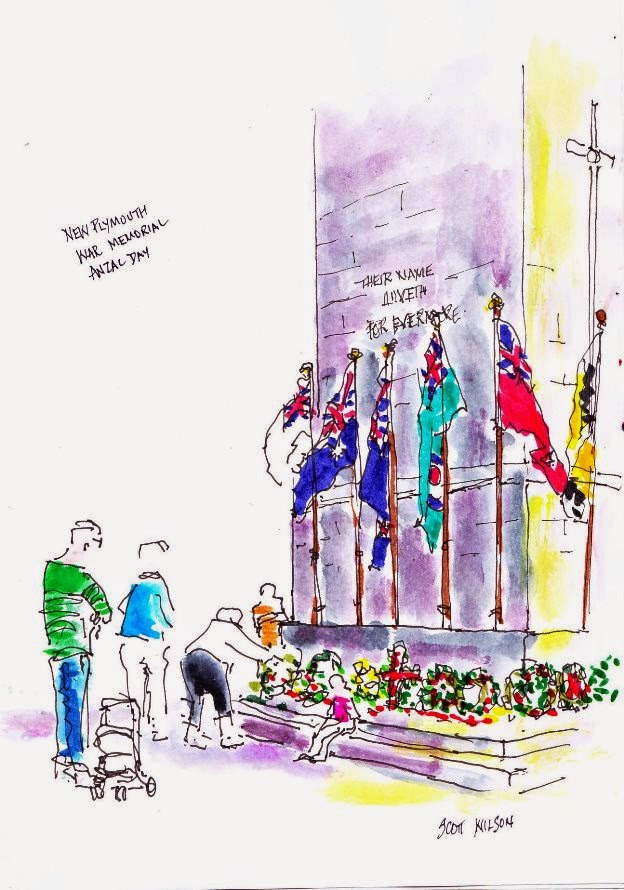 My grandfather and his two brothers were all at Gallipoli in the fighting. Only two came home. My dad was named after this brother who died within the first two weeks. He was only 19.

This was his last poignant note home: 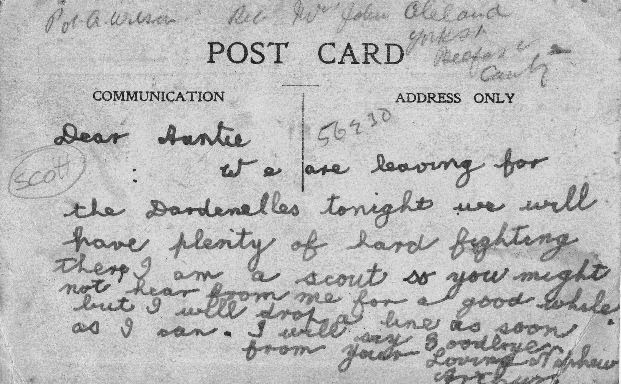 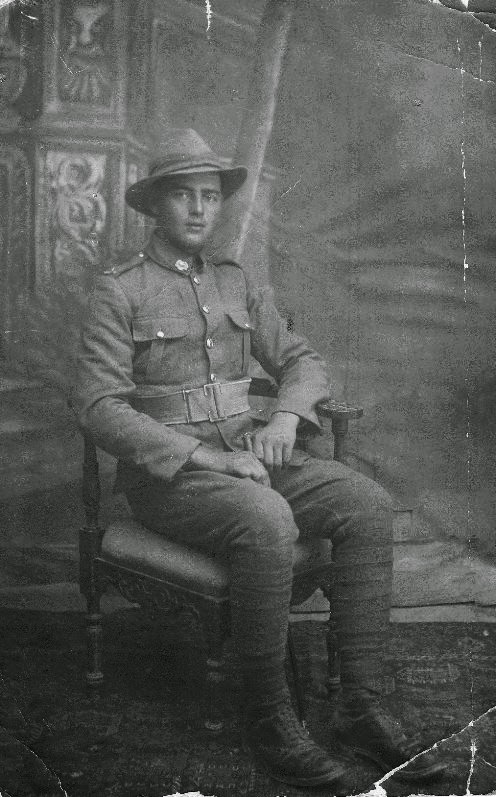 My mum sketched the people who continuously streamed by all day 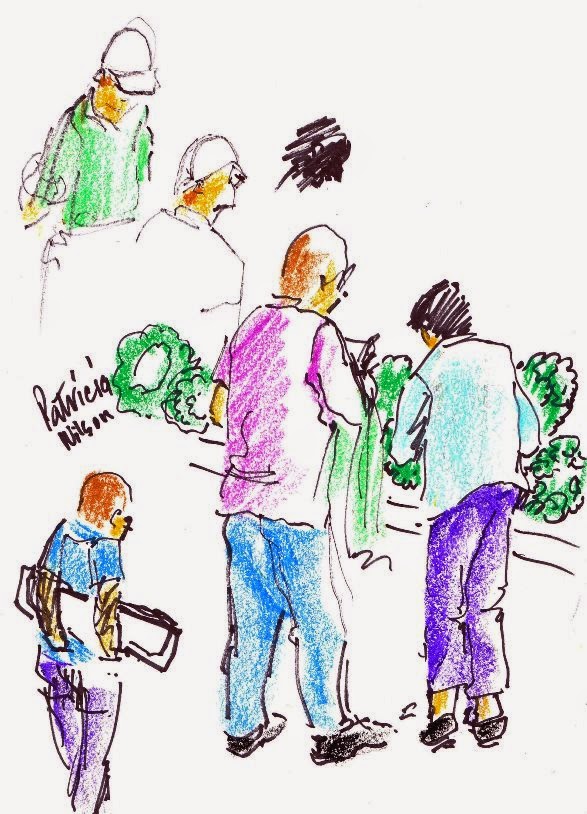 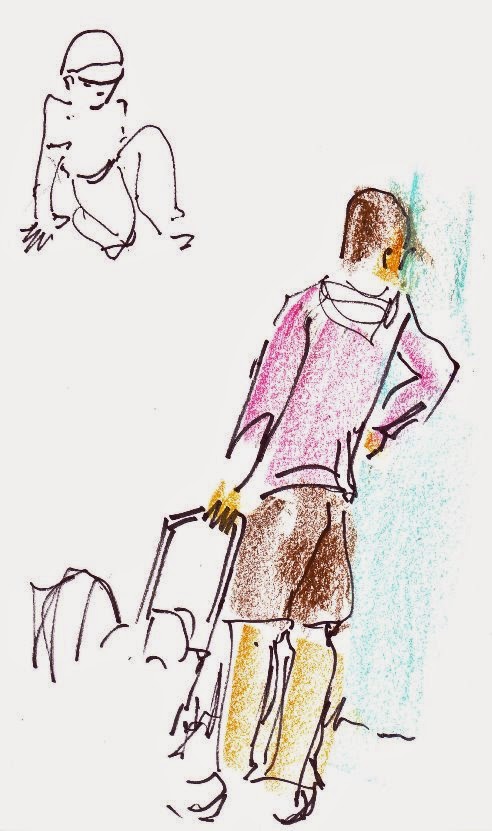 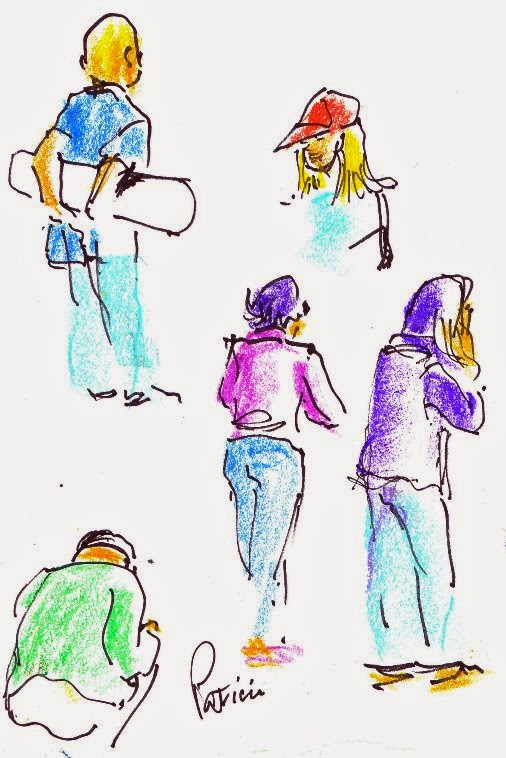 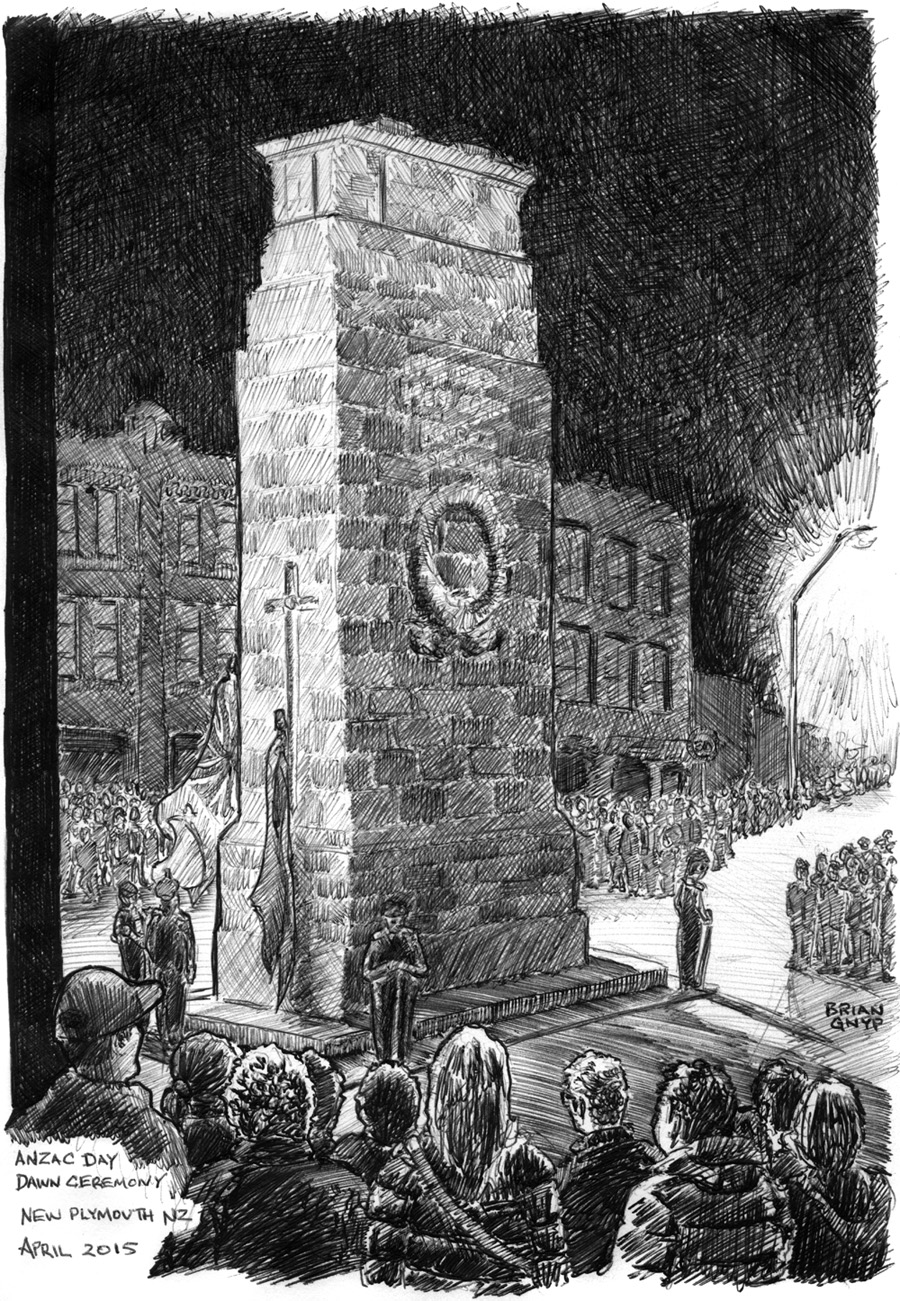 The ANZAC Day Dawn Ceremony commemorates the Australian and New Zealand Army Corps (ANZAC) World War One dawn landing in Gallipoli. This was the start of a large joint campaign (in what is now Turkey) that lasted the good part of a year. In the end, it was a bit of a stalemate but there are probably tons of stories from the Great War that involved sacrifice without much progress made. Today, ANZAC Day is a day honouring people that played a part in all the wars like a North American Remembrance Day. 2015 was the 100 year anniversary of the ANZAC troops in Gallipoli so it became a big deal in the media. As a result, lots of people assembled at memorials all over Australia and New Zealand. This morning, just before dawn, New Plymouth also had a large turnout and I came away with a night sketch.

by Kim.M.
It is very moving to read your grandfather's brother's postcard. I grew up hearing a lot of war stories as well, mostly about WWII, though my grandparents were children during WWI.
It is strange to think about time going on, and how the people who lived those events pass away, and we —who grew up on stories told from firsthand experience— are getting older as well. It is important to keep those memories alive. Thanks so much for sharing.
And great sketches!

by thetaranakisketchers
Merci beacoup Kim for your thoughts. True, it is worth being aware of our history, and what not to repeat.

Attached is a sketch of the wreaths. 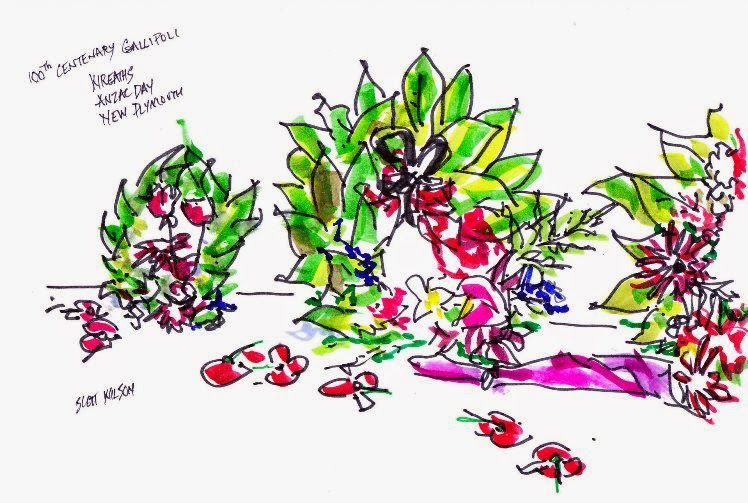 Also a sketch of the cenotaph from Alan 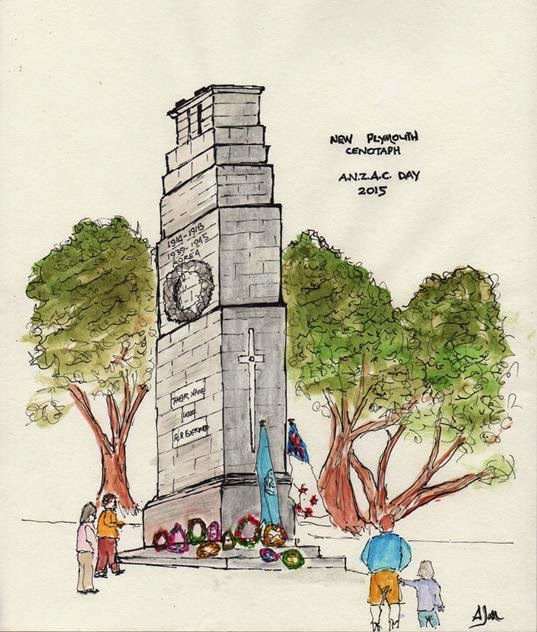 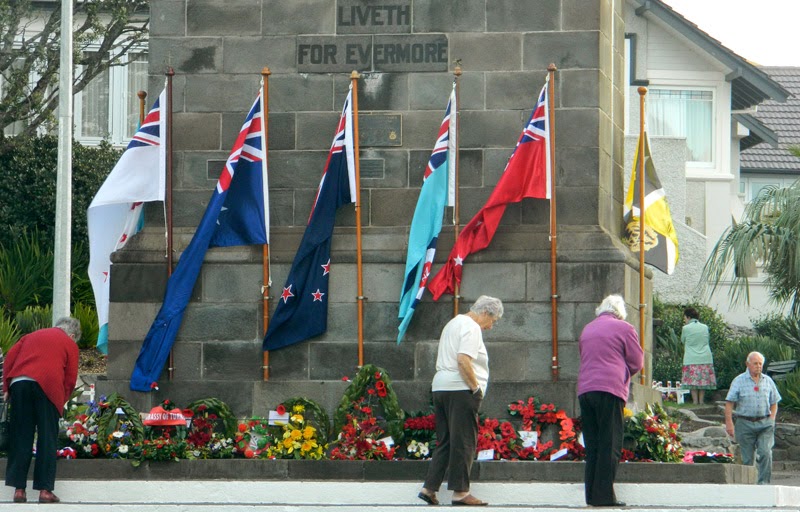 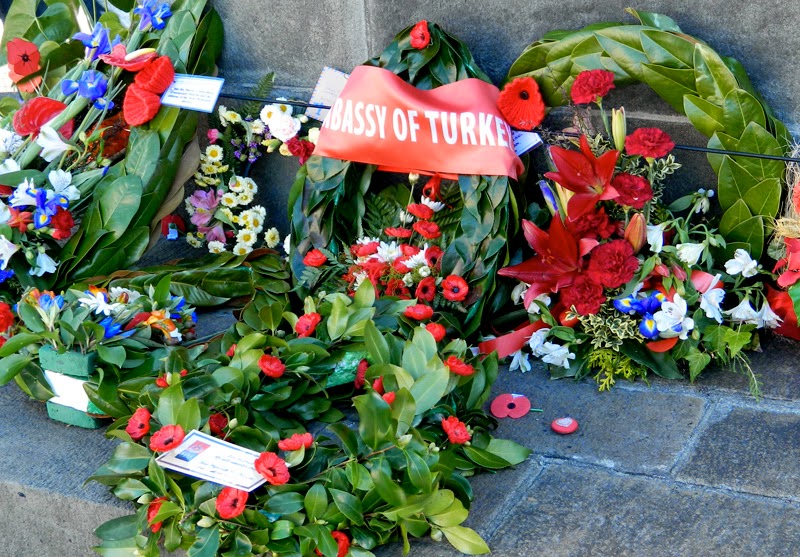 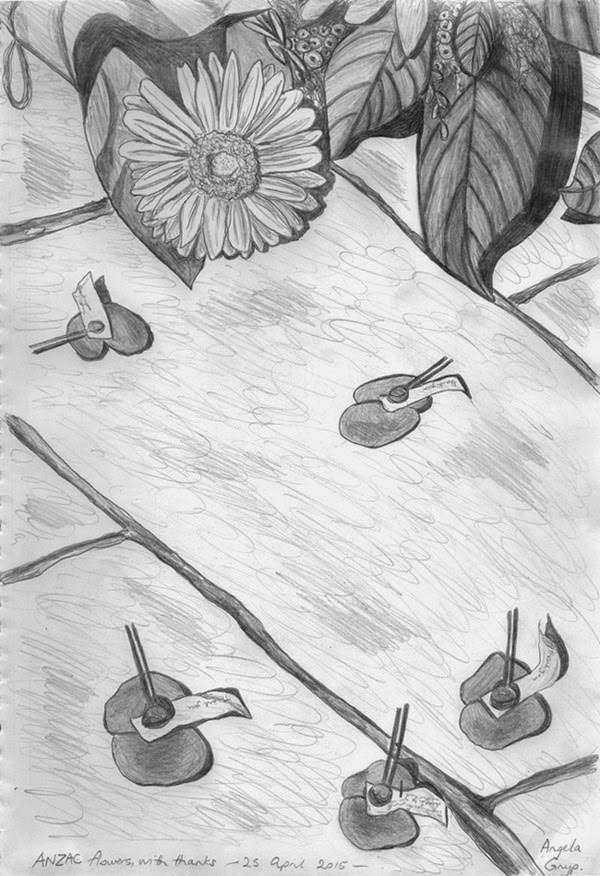 On Anzac Day, there were many beautiful wreaths of flowers to look at and admire. Encircling New Plymouth's Cenotaph, they were placed in remembrance of the fallen soldiers of New Zealand and Australia.

The scattered poppies in the foreground of my drawing have their own subtle yet weighty meaning. As small as they are, each carries a message of 'thank you' printed on a thin strip of white paper attached on the back.

Given all those who fought, lost and survived during the wars, yes we do have a lot to be thankful for. 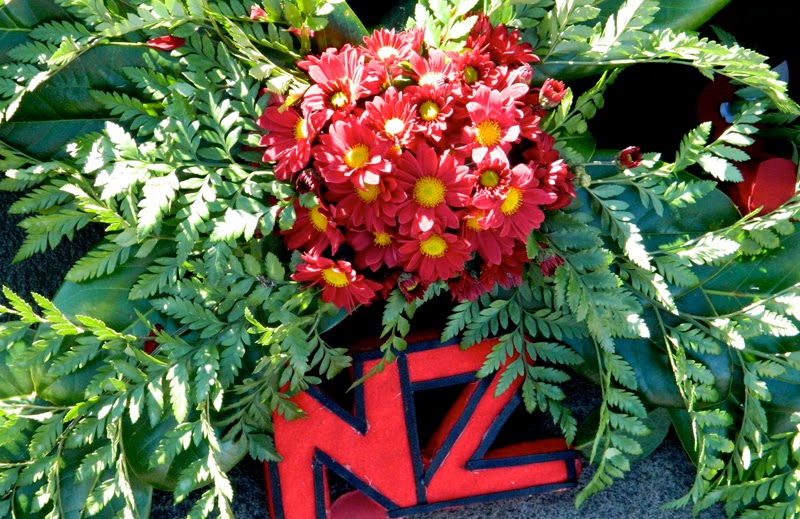 by georges
congratulations ! ..... and respect to your grand father and his two brothers ...

by thetaranakisketchers
Aussi merci beacoup Georges for your kind comments. The two brothers then spent nearly three years in France.
(I like your depiction of people and cars on your link)

This one from AWOL Trevor 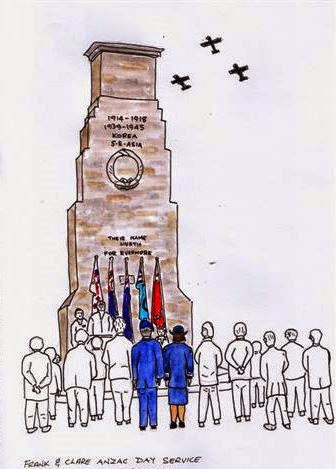 by thetaranakisketchers
Gorges, Brian sacrificed the lives of several ball point pens for that B/W sketch. It is good capturing of light.

This one below is by Maurice, he had to leave early to go to a wedding. 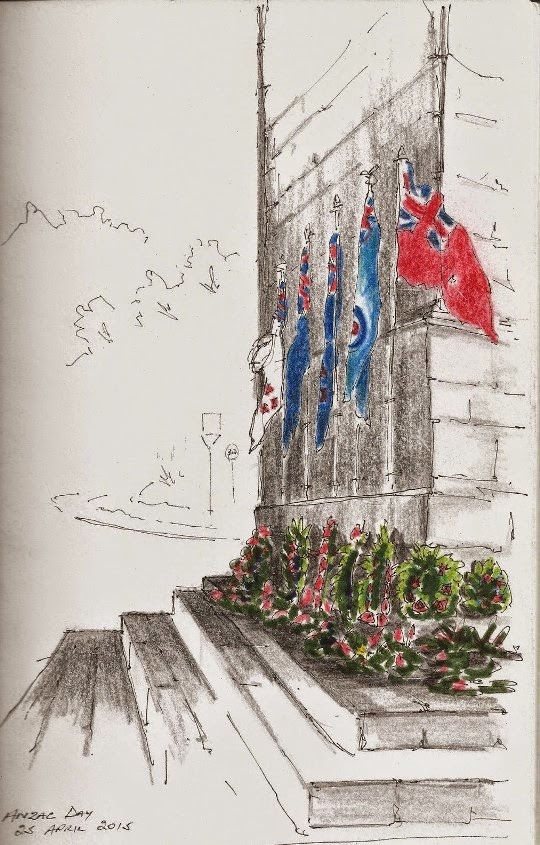 by Joan T
Thank you for sharing the sketches of your day. I think it is a very fitting tribute to those who served. Nicely done!!

by thetaranakisketchers
Thank you Joan.

Trevor also added this - there were rows of them by trevoredavies
This was a day that made us all think