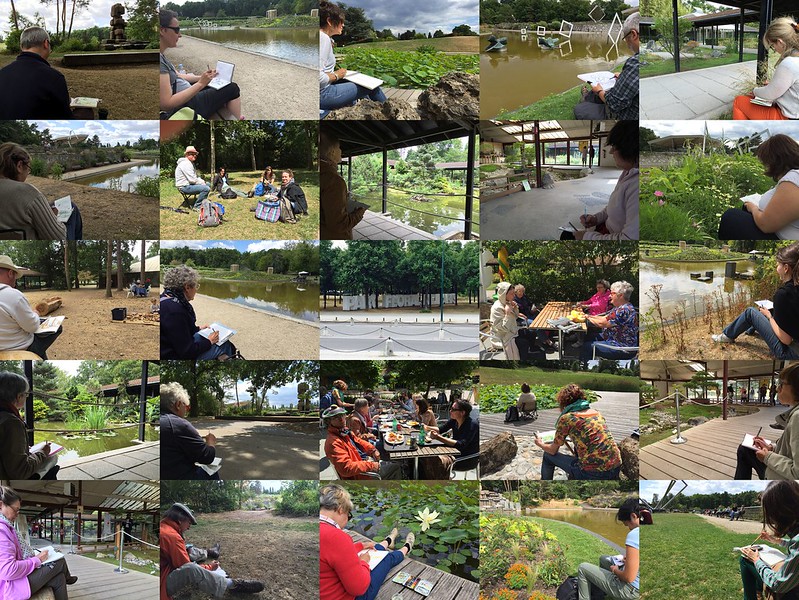 The 48th SketchCrawl is now over in Paris, and it was a very pleasant one.

I started the day quite anxious if not worried about how the event would turn out, giving the strong winds and rain showers that woke me up around 6am and would last after that, the rain being eventually replaced by cold. We may be in the middle of summer, but it did not feel like summer yesterday morning.

Undeterred, I got myself physically and emotionally ready to go to Parc Floral, where the SketchCrawl was to take place. It was great to take the bus on a direct route to the venue ‒ the second time in 3 consecutive SketchCrawls that I have been able to do that. Even better, the trip was short ‒ about 10 minutes.

Once I got to the park entrance, it was about 9:30am. I passed through and waited nearby until it was 10am before advancing further (10am because that was the time of the first rendez-vous, at Le Bosquet, one of the two restaurants inside the park). Some minutes later, Pierre and Annie, the latter of whom had just arrived from Rouen by train, trickled into the park. I went over to greet them, and officially met Annie, even though I had seen her at a SketchCrawl last year. Pierre, I had already met him on some past events, notably SketchCrawls. Besides, I had seen him having coffee 15 minutes earlier when I passed by Le Drapeau, the café where we would all be meeting at 5pm.

The three of us walked to Le Bosquet. When we arrived, we went inside and settled down at a table. Within the next 15 minutes, we were about 7 people at the table. 15 minutes later, we were 9. And throughout, the sun became more and more present, to the joy of everyone.

After coffee, most people went off to different areas in the park in search of something to sketch. I stayed in the restaurant, welcoming those who arrived later while I worked on the sketch below. It is a view outside from the central entrance of the restaurant. Fortunately, I was able to finish it some minutes before lunchtime. 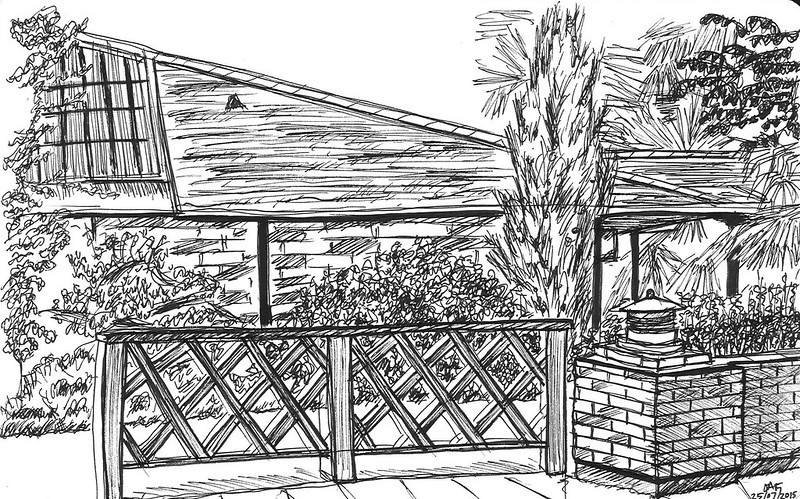 Everyone convened at Le Bosquet for lunch at 1pm. We were well over 20 in count, and the sun was all out. Most people sat at tables outside on the terrace, while a few others had a picnic on the grass a few steps away. It was a lovely scene, with everyone mingling.

We all left the restaurant around the same period of time, about 2pm. Once again, the group dispersed for more sketching. I stayed, preparing myself for the next challenge that I had set for myself during the SketchCrawl: find other sketchers throughout the park and take photographs of them while they were working. It was a challenge that would occupy me for almost 3 hours. And, in the end, I did not get everybody! I had suspected that some were hidden from view in the concert area, where Imani Winds was performing as part of the Paris Jazz Festival. Also, I was certain that a few others were deep in the park, focusing on plants and trees, and more plants and more trees. For a couple of sketcher sightings, it was just a matter of unluck; we were at the right place all right, but not together at the right time.

In any case, the photos taken during this challenge were useful in creating the collage above.

At 5pm, we had a final gathering at Le Drapeau, a café facing the main entrance of Château de Vincennes, located nearby, about 5 minutes north of the park. Some sketchers had arrived earlier and had started celebrating. I was among the late arrivals, by 20 minutes. A couple of others arrived even much later than I did. The ambiance was nice. Over two hours, people made acquaintance, shared their sketchbooks, and discussed all materials, techniques, and other sorts of matters.

In all, there were about 35 people who participated in the SketchCrawl at Parc Floral, or part of it.

Thanks to everyone who came and especially to Agnès, Blandine, Valy, and Estelle who organized the event.
Last edited by oludotunf on Sun Jul 26, 2015 10:32 pm, edited 1 time in total.
Top 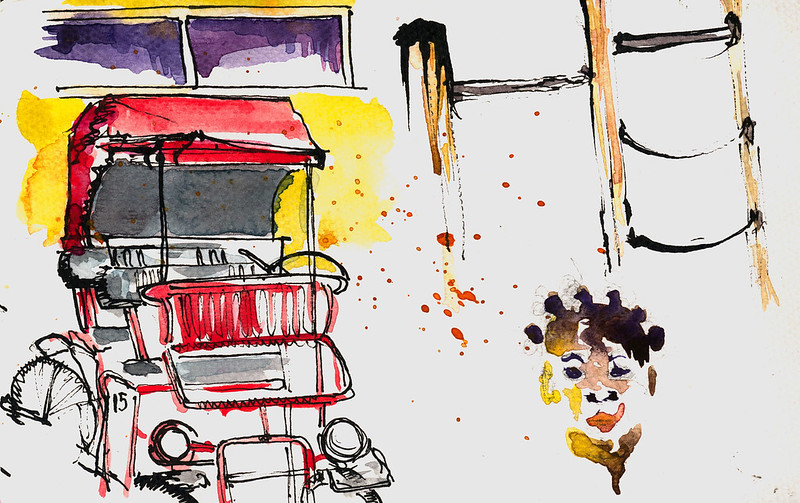 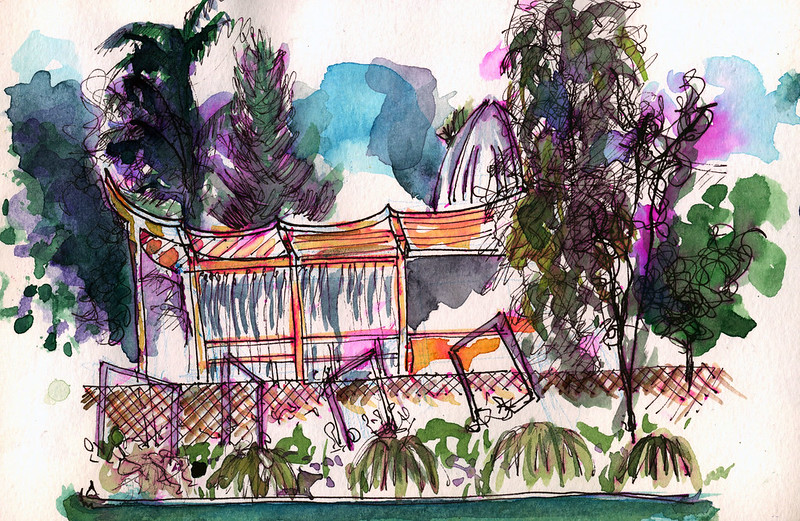 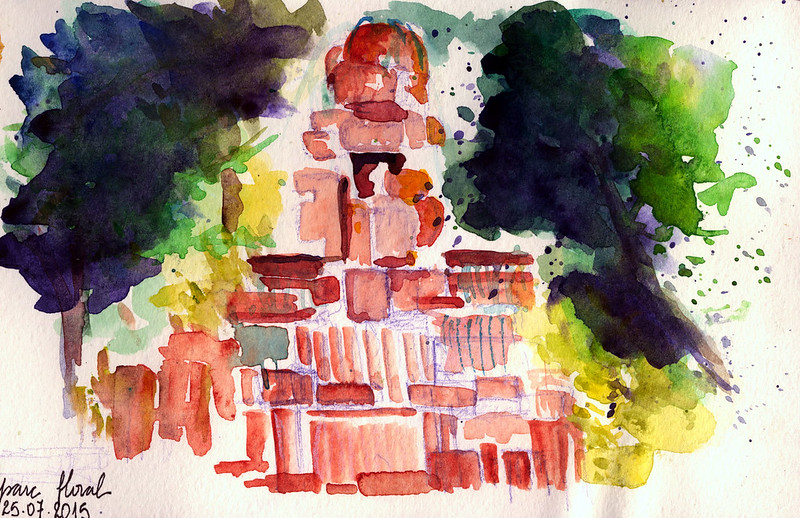 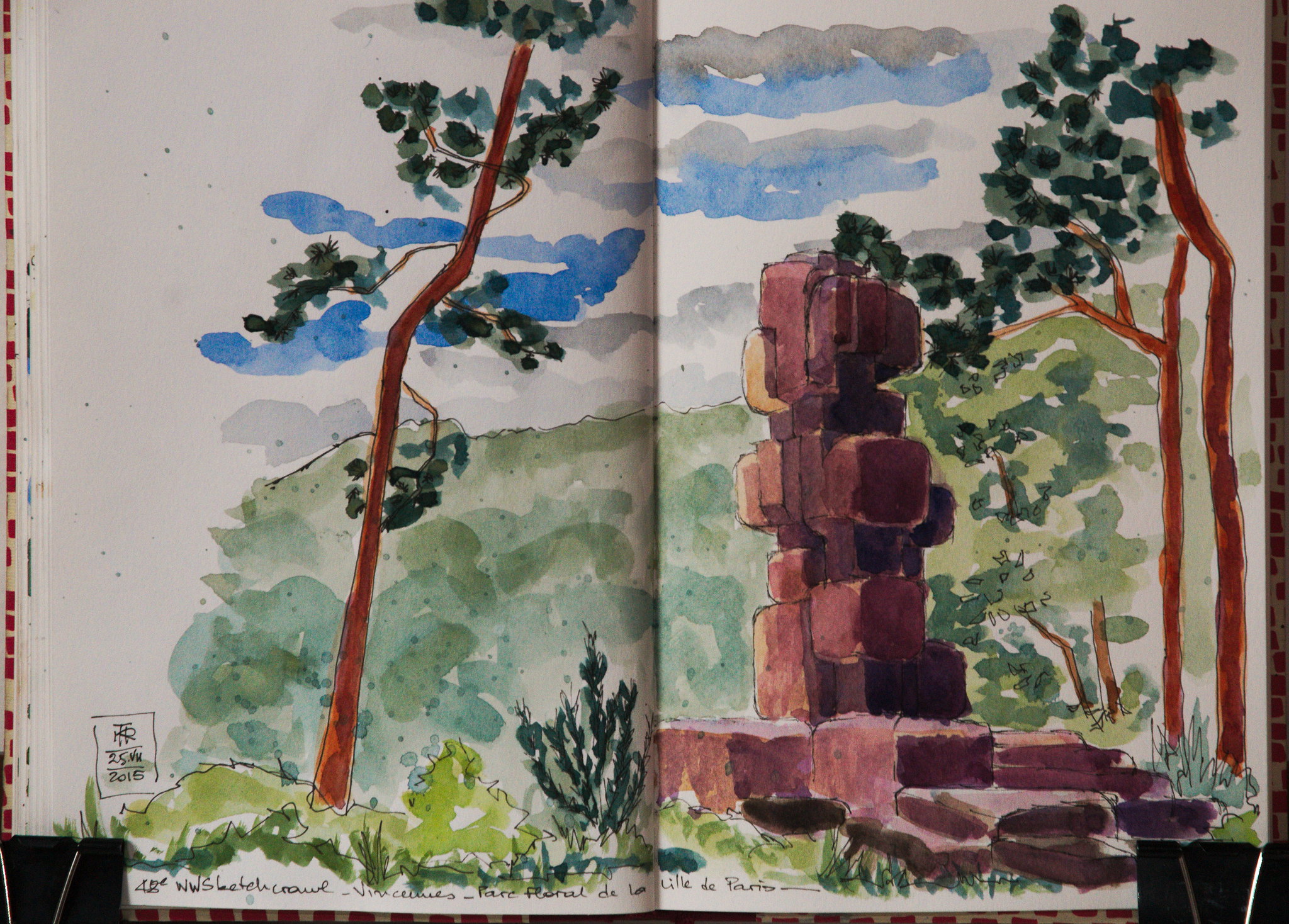 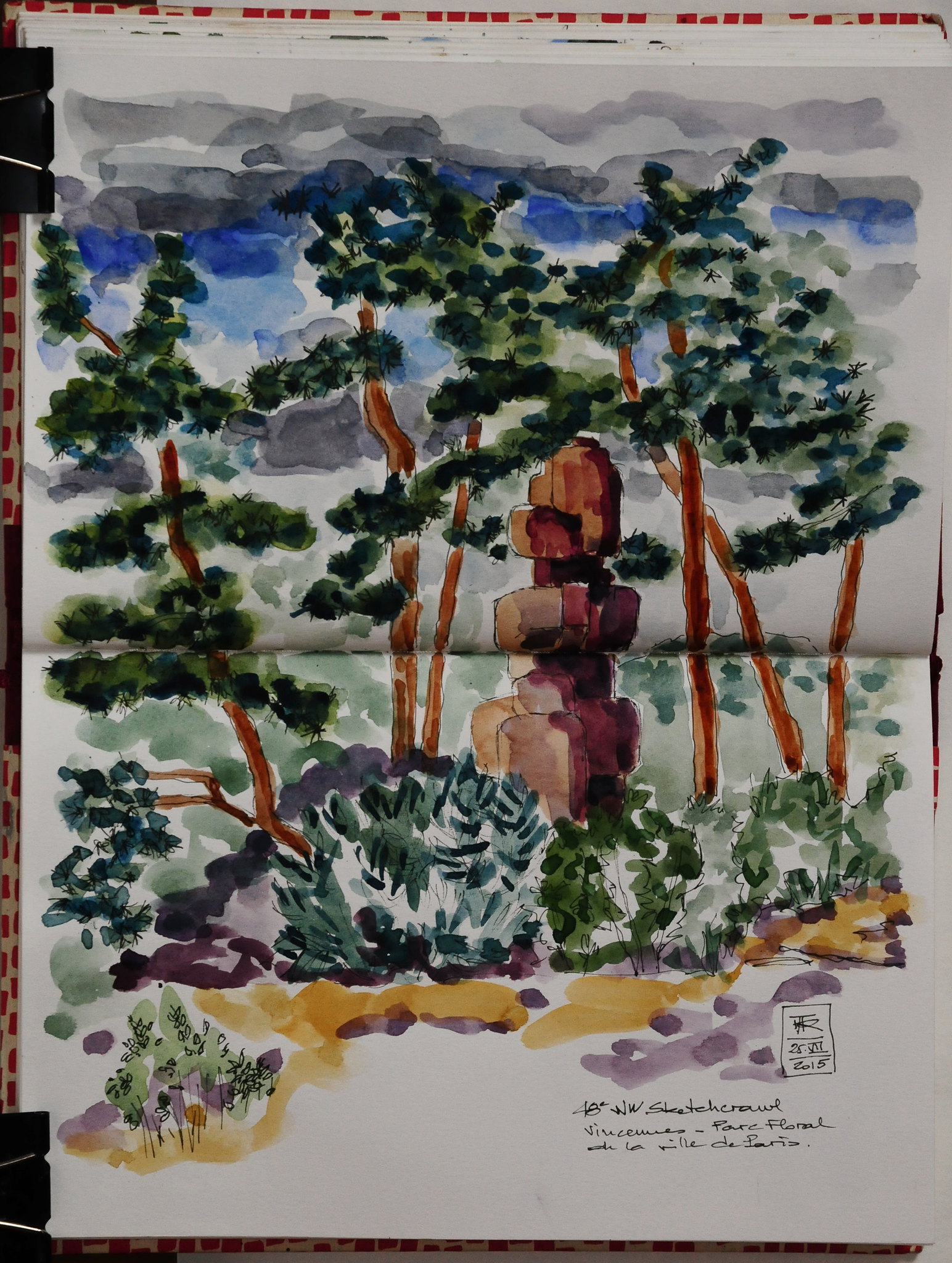 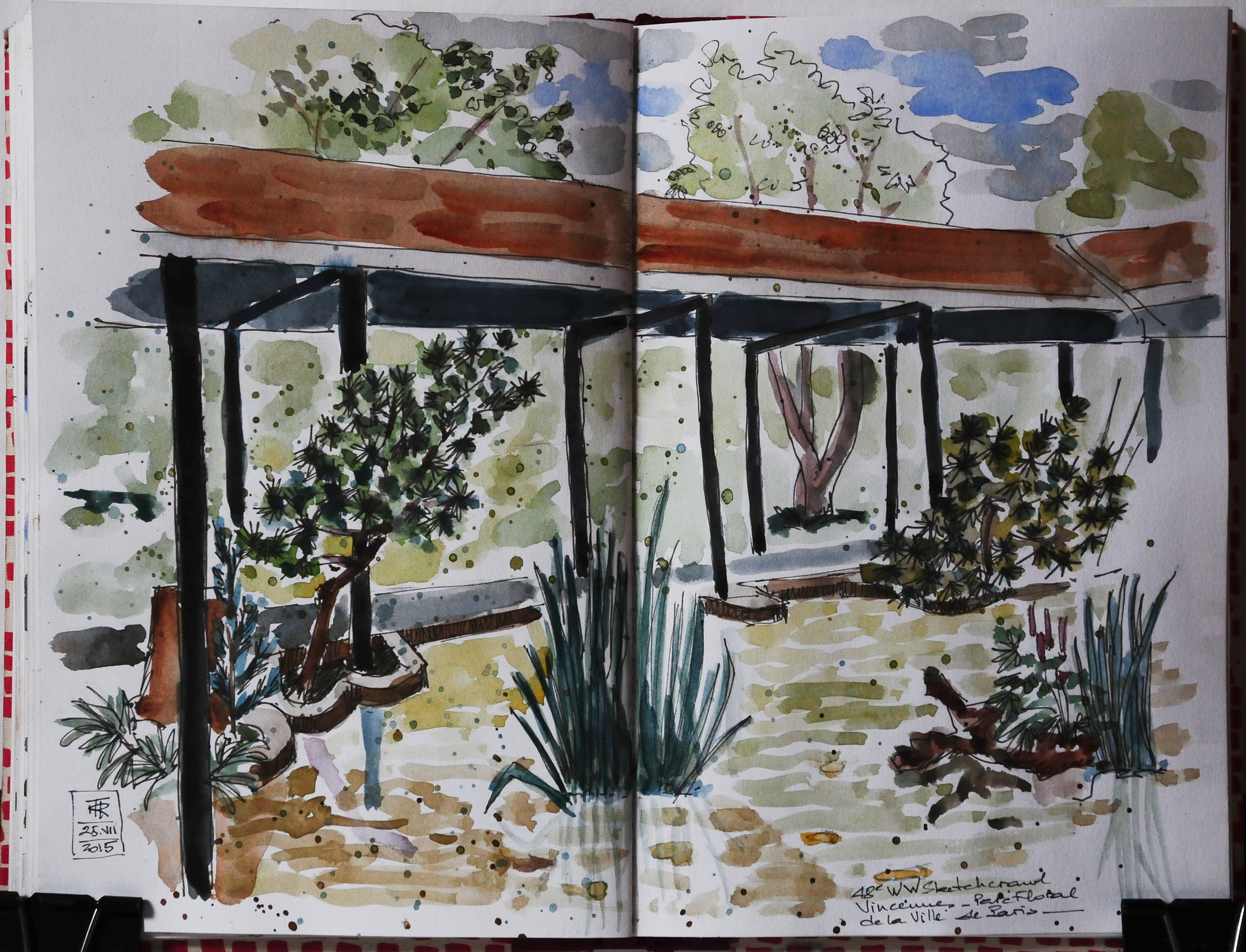